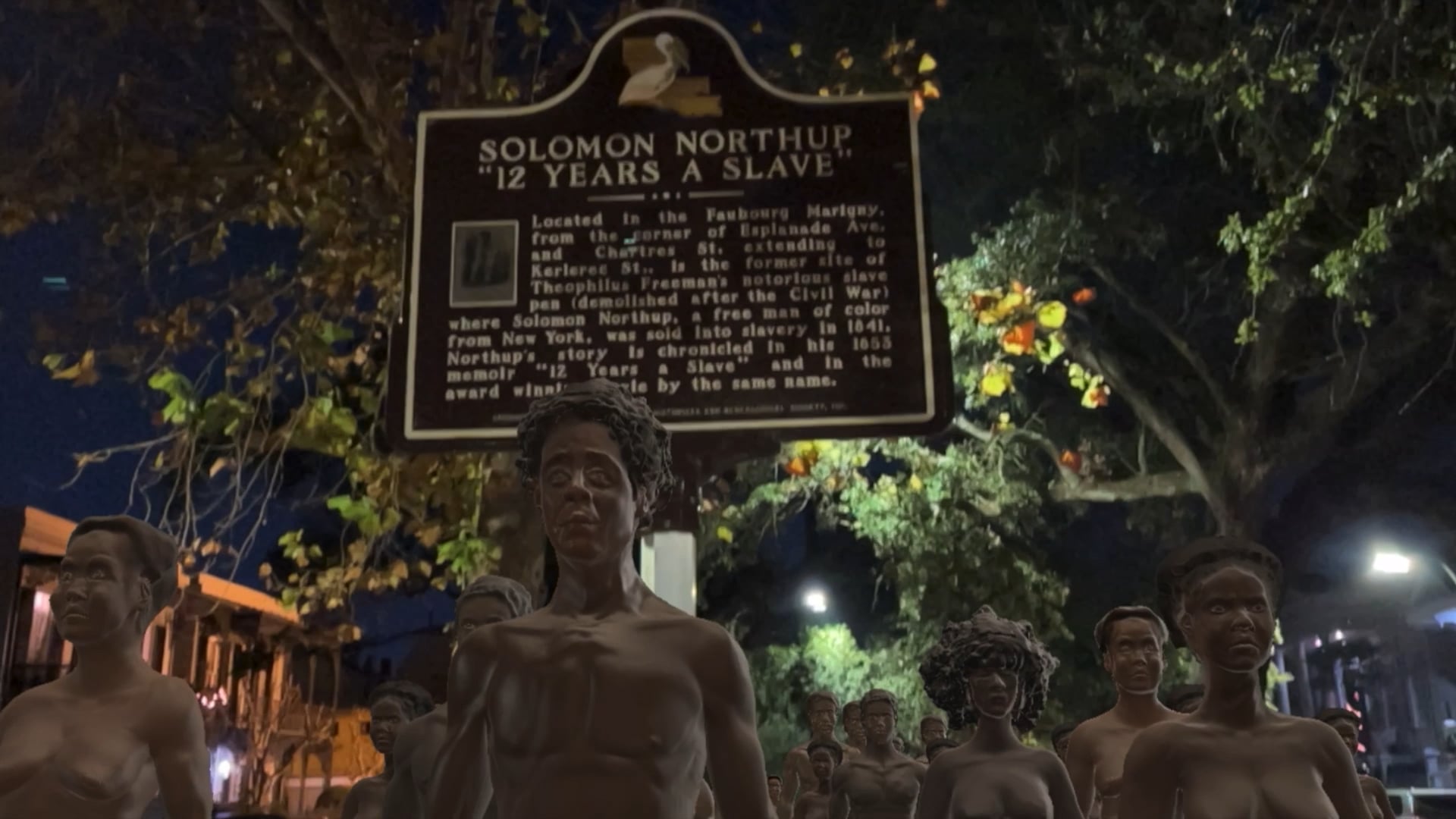 America needs the ghosts of slavery to remind us of how our nation was really built.- Marcus Brown

1.Download the Ar Adobe Aero App on your smart device using the QR below or found on the pole.

2.You do not need to sign up or sign in. It just needs to be on your device/phone/tablet.

3.Open your regular camera on your smartphone and scan the QR code labeled for the Exhibit.  Your camera will show you a link to open the exhibit.

4.Once the AR project loads. Anchor the model to the anchor shape on the ground in front of the marker.

5.You can record video or take pictures.

The same day Solomon Northup gained his freedom on January 4, 1853.

The Exhibition opens with no formal reception.  Please visit any time.

Slavery Trails is a musically interactive augmented reality (AR) installation series based on slave ships and enslaved people, placed on historical sites throughout the United States. Artist Marcus Brown created this series to virtually mark areas where enslaved people were held, sold, and worked in the United States. The interactive Augmented Reality (AR) sculpture series presents multiple exhibits that represent enslaved peoples using present day Black Americans. Brown's project begins with the placement of virtual sculptures in the exhibit Marcus Brown Slave Artist No. Series. The exhibit is only visible by smartphone or smart devices. The exhibit depicts the artist Marcus Brown as an enslaved person standing on the neutral ground or street median located on the corner of Chartres Street and Esplanade Avenue in New Orleans. This is the same median where Solomon Northup was sold as a slave over 180 years ago. Each of Brown’s self-portrait sculptures will be presented and digitally sold from his website for the modern-day price of a domestic slave from the 1840s. Brown’s goal is to use the proceeds from each sculpture sold to fund a national project that creates more markers around the country.

Thank you from the artist!

Thank you to everyone who made the June 20th 2022 sculpture unveiling of the Slave Artist No. Exhibit possible.

"New Orleans was once the center of U.S. slave trade. This artist wants to make sure we don’t forget"  PBS NEWS HOUR CANVAS Arts Jul 6, 2022 5:37 PM EDT
By Roby Chavez